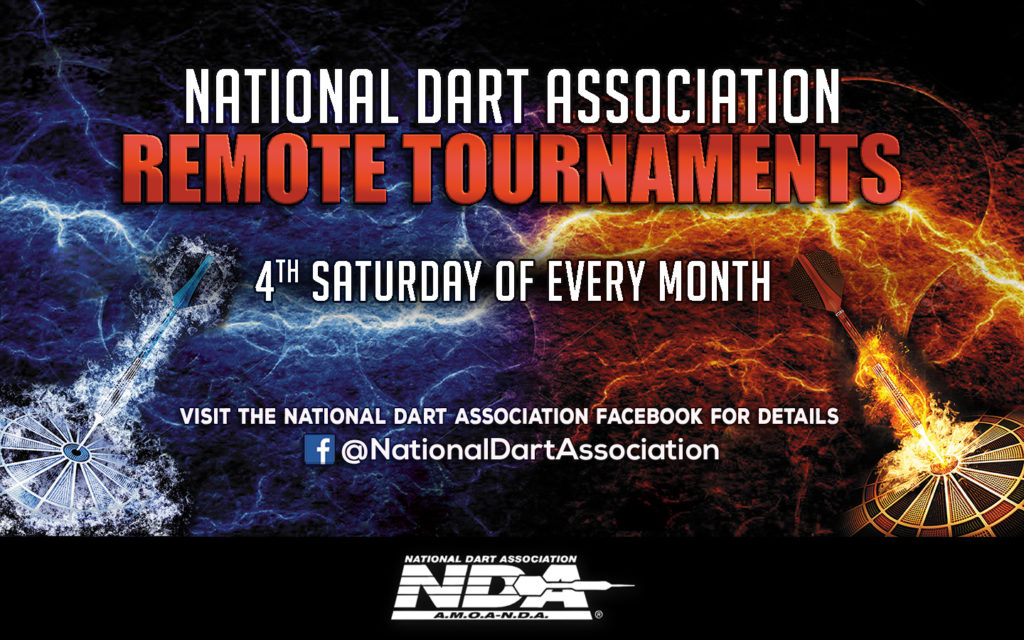 With the location closures and related bans on social gatherings across the country/world due to the COVID-19 pandemic, NDA’s monthly Remote Tournament scheduled for Saturday, May 23, 2020, has been cancelled.   A decision on the June event will be made by Friday, June 12.   In the meantime, stay well, stay safe and thank you for your continued patience and understanding.

Please make sure you have accounts and Apps for the following programs!

Players are responsible for signing up and for payment.

1. PayPal: You will need to have a PayPal account to make tournament payment entries and to receive your winnings!

2.  GroupMe: This app will be used as your main source of communication during the event.

3.  CompuSport: CompuSport will be used for sign up and tournament play. Please watch the scorekeeper video to ensure you know how to advance your team in the bracket.

Operator Requirements
As a NDA Charter Holder member, to participate, we need you to follow these easy steps:
1.  Sign and forward (scan/email or fax) to us your consent form granting us limited access to your Arachnid 360, LLC
LeagueLeader.net account in compliance with its Terms of Service (“TOS”) so we can use:
2.  You must enable ‘Remote Play’ and ‘Enable Sharing of this Machine’ for your Galaxy 3’s
so they can be used in these events.  Click Here: Printing the Share Code List
3.  Make sure to upload your NDA files from Compusport to ensure player NDA Sanction ID's are available.
Click Here :  Obtaining CSV File and Uploading it into League Leader
4.  Promote the NDA remote tournaments to your players, early and often!
Note: Please get us your signed consent form as soon as possible: In order to participate in future and all remote tournaments  ~YOU~ must have your consent form on file in our office.  EMAIL ALL DOCUMENTS TO: [email protected]
In summary, rest assured, your consent authorizing us access to your LeagueLeader.net account is restricted and limited: We WILL NOT and CANNOT make any changes, and, you will only need to provide us with your signed consent form once,which we will keep in our records. The NDA WILL NOT share your information with any third parties without your further, additional, express consent.
Thank you for helping us to make these events a great addition to the soft-tipped dart community!! If you have any questions, please contact the NDA Tournament Manager, Rachel Kamuda at (708) 326-5143 or via email [email protected]. Assistance with enabling Galaxy 3 remote play or LeagueLeader.net, please contact Arachnid 360, LLC’s Tech. Support
Tournament Guidelines

Welcome to NDA’s monthly weekend remote tournament program.    Our goal is to provide you with an ongoing opportunity to have fun and compete while playing with/against other darters from around the country and world!

First, a word about expected etiquette in our remote events:

Proper conduct and sportsmanship are expected and required of players at all times. During NDA events, NO PHYSICAL CONTACT or WORDS/ACTIONS WITH AN INTENT TO INTIMIDATE OR HARM OTHERS is allowed.  There is ZERO TOLERANCE when it comes to violations of this policy and decisions made by remote tournament officials—and the penalties associated with their rulings—are final.  As well, if/when presented with conclusive evidence of sandbagging or cheating, the “death penalty” applies:   offending players will be banned from participating in any future NDA events.

First, there are a few things you need to do:

For doubles or other multi-player team events, each team must designate a captain, who is responsible for the following

Check out the video training materials about CompuSport on ndadarts.com, under Remote Tournament Training Videos. They are also available on the NDA Remote Facebook group page.

*Note: Players that are playing on a team must play for the same operator/vendor.

"Rules/Board Good.” This verifies you have read, understand and agree to   abide by the rules and instructions provided, and that you have verified the board is properly set up.

“Ready.”     This confirms the player/team is present and ready to play.

*This can be sent all in one message by the Team Captain.

a.  QDiddle will be the substitute for the diddle, it is set as one round of count up/ 3 darts only, one player only. Winner of count up game starts the first game.

b.  Count up will be Split Bull.

c.  Team on the top of the bracket is home and will start the count up game.

d.  In the event of a TIE on the Diddle: You will back out and restart the game of count up. The opposite player will throw, with the opposite team throwing as the home team.

2.  Once winner of count up game is determined, exit the QDiddle league, return to Remote Leagues and select the remote league that starts with a Q.

3.  Loser starts all other games.

“The Dart Board Is Always Right” rule applies for NDA remote tournaments:

A dart thrown that sticks but does not score or appear on the darts thrown count on the monitor is scored as the board reads.

At the End of the Match:

*Note:   NDA’s remote events will utilize the Match Progression feature, meaning   players/teams may only play one round ahead of the Losers Bracket

Players/teams that finish first, second or third and/or who win money in the NDA remote events are required to submit a picture of themselves/their team in front of the dart board using the Group Me App. No prize money will be awarded without such photo identification.

NDA will send prize money to the PayPal account of the captain of the winning team within 48 hours of the tournament’s conclusion. It is the responsibility of the team captain to distribute winnings to his/her partner/teammates.  NDA is not responsible for any non-payments/disputes between players once the funds are deposited in the team captain’s PayPal account.

To All Operators and Players that are participating in the NDA Remote Monthly Tournament,

Please take some time to read and acknowledge the tournament rules below.

If you have any questions, please contact the NDA Tournament Manager, Rachel Kamuda at (708)326-5143 or via email at [email protected]

will be used for sign up and tournament play.

Thank you to all the Operators and Players

that participated in our February tournament!

Here is a list of Our Open Doubles February Winners:

Winners of the January 25th 2020 NDA Remote Tournament!
Thank you to all the Operators and Players that participated in our January remote tournament! We had 23 operators,
56 teams, 112 players, and awarded nearly $3,000 in prize money!

Here is a list of Our Open Doubles January winners :

A special thank you to ALL the players who participated and spent the day with the NDA!

Mark your calendar for January 25th for our next remote tournament!

Here is a list of Our Open Doubles December 21st winners :

Thank you to all the Operators and Players that participated in our November remote tournament!  We had 22 Operators, 39 teams, 78  players, and awarded nearly $2,000 in prize money!  Mark your calendar for December 21st for our next remote tournament!  Registration opens Friday, December 13th and closes  Wednesday, December 18th at NOON CENTRAL TIME!  Here is a list of Our Open Doubles November 23rd winners :

Thank you to all the Operators and Players that participated in our October remote tournament!

Mark your calendar for November 23rd for our next remote tournament!

Here is a list of Our Open Doubles October 26th winners :