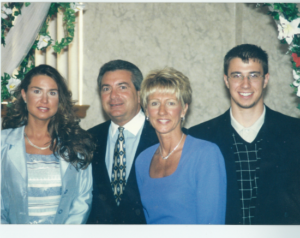 NDA: Sam, tell us a bit about yourself—where you grew up and live now…and your family.

SAM: My name is Sam Zammuto. I was born and raised in Rockford, Illinois, a city 90 miles West of Chicago in Northern Illinois. I have been married 25 years to my beautiful wife, Connie. I have two adult stepchildren and 4 grandchildren. I still currently reside in Rockford.

NDA: Besides work, any hobbies or interests?

SAM: My hobbies are playing darts, golf, and doing a lot of fishing at my cabin in Wisconsin.

SAM: I started out playing darts over in England from 1967-1971 during my time in the United States Air Force, where I traveled with a 10-man team playing at different pubs from Central England to Northern England. In 1977 was the first time I saw an electronic dart machine in a bar, at the Western Tap, on 11th Street in Rockford, Illinois. Following this discovery, I played darts locally and created a league made up of 7 teams here in the Rockford area. At the same time, Green Bay, Wisconsin also started a dart league of soft-tip darts on Arachnid Model 3000 boards, which during this time only had 3 games on the main menu; 301, 501, and Count Up. With only 7 dart machines in the city of Rockford, it tripled within one year. After two years, we had 50 dart machines out with 50 teams playing on them. At the time the owner of Arachnid, Paul Beall, asked if I would assist him in creating leagues and marketing the electronic dart machine. In 1982, my first year of getting paid (ha!), we started teaching and training operators on dart leagues. The boom of electronic darts between 1984 – 1989, exploded with competitors of Valley and Merit entering the marketplace. In 1986, I came up with the idea of putting Cricket on the Model 6000 Arachnid Dart Board. Wow, the marketplace exploded with electronic darts. In the years since, I have been a part of many revolutionary changes.

NDA: Almost since the beginning, you have been an ambassador for electronic darts—teaching operators around the country and world how to run leagues. What’s the biggest change you’ve seen in the industry over the years?

SAM: Between the years of 1984 – 2005, over 600 operators have visited Arachnid for league and technical training, and we continue to offer training to any operator who wants it. The biggest change I have seen in the industry, is with the education of operators running dart leagues, it solidified soft-tip darts in the marketplace along with pool and jukeboxes all as staples in the amusements industry. During this time period, Europe jumped in the market, with the countries of Germany, Spain, and France all emerging as strongholds for electronic darts. By 1989 the revolution of electronic darts was completely spread throughout the world, as well as in Asian countries, wanting to compete at the local and world levels.

SAM: Most people like playing electronic darts because of the comradery and their own personal excitement when they hit a triple and the dart machine gives you a “WOW!”. The hand-eye coordination between a man and a woman has proven to be equal making the competition very leveled between the genders.

NDA: You have been involved in NDA for 30+ years. You’ve been a member of its board of directors and were inducted into the organization’s Hall of Fame a decade ago in 2010. What has your involvement in NDA meant for you and Arachnid?

I have been on the NDA Board of Directors since 1989, which has seen many changes over the past 30 years and has become one of the best major World Final Tournaments in Las Vegas alongside the BullShooter World Finals in Chicago. The NDA Team Dart tournament gives the player more excitement and opportunity at each and every skill level. I am proud and honored to be part of

the decision making that goes into growing this tournament over the course of three decades.

It was and still is an honor to have been inducted into the NDA HOF in 2010, alongside two fellow Arachnid employee, Bob Wiles and Mike Gannon. To me, it represents a lifetime of hard work doing something I love and creating a fun, social event for all men and women that participate in soft-tip darts throughout the world.

NDA: This year’s Team Dart was shaping up to be a special, memorable event. Unfortunately, due to the pandemic, NDA canceled the tournament that would have been underway this week in Las Vegas. Arachnid recently cancelled its annual BullShooter tournament scheduled for next month. So, like virtually all businesses and industries, we, too, are feeling the impact of the

outbreak. What feedback or response have you heard from players and operators about Team Dart and BullShooter events?

SAM: Unfortunately, due to the unprecedented circumstances of this pandemic, it really put the dart industry in a holding pattern; something we could have never imagined would happen nor could we have planned for. I believe both the NDA and Arachnid BullShooter organizations had to make some very hard decisions and essentially did what was in the best interest of the dart players. Much like the dart players, I feel the NDA Team Dart 2020 would have been fantastic in the year 2020, as I was looking forward to it myself. So I know there was much disappointment felt all around to hear it had to be cancelled. Making the call to cancel the Arachnid BullShooter 35 World Finals scheduled to be held in Chicago over Memorial Day weekend in May, was a difficult one that had to be made. This is the first time in 35 years I will get Memorial Day off without having 1500 players competing darts and partying in a ballroom. I imagine it will be significantly quieter this year. I am sure the players throughout the United States and the World are quite upset at being unable to attending two of the best world finals tournaments this year. It is something they have been working for all season and were looking forward to having fun and showing off their skills. Once this virus is over, I anticipate the electronic “boom” for darts will explode for leagues and remote play. Currently, most players are taking care of their family and practicing in the safety of their own homes, and that is what truly matters but I know they also look forward to the day they can get back at it, and enjoy

doing something they love once again.

NDA: There are still states where bars are open and darts are being played. How has the pandemic affected things at Arachnid as far as manufacturing, shipments and the office?

SAM: There are still some states, where the restrictions have not applied. So while we are not currently manufacturing dart games, there are still games available and being picked up at our door during limited hours. Arachnid appreciates all distributors and operators that are still pushing Galaxy 3’s to the markets that are still open, as well as the ones in the future that will re-open following the outbreak. Safety is always a number one priority, and we have taken extra precautions necessary to maintain a safe environment for our staff and customers.

NDA: What have you and your family been doing to get through these challenging times?

SAM: During these times, I am still working remotely, and answering phone calls throughout the day from distributors and operators. My wife and I are watching a lot of TV and movies, and I am sure I am eating twice as much!

NDA: No one has a playbook on this, but what is your outlook during the next 6- 9 months?

SAM: My outlook on the opportunity for leagues to start up again is approx. June 1st, throughout the country. Soft-tip darts is such an exciting sport for all ages, and I am sure it will be a very positive experience for players, bars, restaurants, saloons, and operators once they get the ‘OK’ to start up again. Arachnid and soft-tip darts offer a great social gathering of 4 – 8 people, and an opportunity to mingle and engage with new people.

NDA: What is your favorite…

…Music or band: Paul Revere and the Raiders

…Thing to do in Vegas (besides playing darts): I enjoy gambling and watching people have fun. Whatever happens in Vegas stays in Vegas!

Anything else to add ?

SAM: I have personally enjoyed the 43 years I have been involved with electronic darts moving it from 0 – 100 MPH. Being a part of the Arachnid team to help create electronic darts into a sport event, the 1986 invention of Cricket, online telecommunications in 1991, the 2012 the release of a board with two dart heads, and the 2018 release of the Galaxy Fire with a cabinet the “glows in the night” has really been amazing! I am grateful for all of these achievements and it has led to the greatest sport of darts with the Arachnid.

Thank you for this opportunity and I hope everyone has enjoyed reading this.