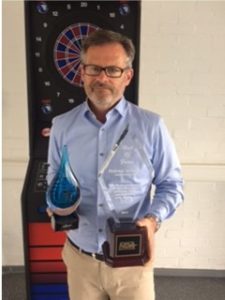 Editor’s Note: Helmut is a long-time member of the NDA board of directors. As one of four NDA manufacturer sponsors, his company, headquartered in Germany, furnishes the Valley-branded boards used at Team Dart each year.

NDA:  Helmut, tell us a bit about yourself—where you grew up and live now…and your family.   Besides work, any hobbies or interests?

HELMUT: I was born in Kaiserslautern, a small town with 100,000 inhabitants – pretty close to the Ramstein US-military airbase. I also spent my childhood there. After studying business administration, I lived in Düsseldorf (Rhenania) and in Mainz. Since I have been working at Loewen, I have been living in a small town of 5000 inhabitants near Bingen am Rhein. In my free time I like to play sports, especially soccer and tennis. However, according to my age of 61, I will soon switch to golf. Otherwise, I like to spend time with my wonderful wife and as often as possible with our son, who unfortunately lives 200 miles away.

HELMUT: In 1992 I started at “Loewen” as Marketing Manager Sport (electronic darts, table soccer and billiards) in a company that was actually dominated and is for the development and manufacture of gambling machines. Actually, I only wanted to stay a few years – this has now turned into 28 years – and if it goes well, there will be 5 more years.

NDA:  Tell us about your company and your responsibilities there.

HELMUT: Loewen has been around for over 70 years and has always developed and manufactured gambling machines and music boxes (NSM jukebox). Loewen is a medium-sized company with approximately 3,500 employees.  My title is Director International Sales, but it doesn’t describe the full scope of my work. I manage the product management Electronic dart and the large area of ​​replacement and exchange parts for our tens of thousands of gambling machines that we have in Germany. I am also responsible for the export in our company.

NDA: What’s the coolest thing you’ve gotten to experience as being affiliated with the dart industry?

HELMUT: From the beginning I felt very comfortable in the darts community. The darts world is not a sterile and stubborn business. It is more like a big family and we give many people a home and for many the most beautiful thing in the world.

NDA: If you could pick one person who you would like to play with or against in a game of darts, who would it be?

HELMUT:  Unfortunately, I have to take a trip into the steel dart scene with this question. Phil Taylor – The Power, the Legend. Indescribable what a success this man has achieved by throwing 3 darts on a dartboard. Last year I was close to two events that we had in Germany – but I didn’t dare because of my bad darts.

NDA: Since the time you first got involved in darts, what’s the biggest change you’ve seen in the industry over the years?

HELMUT: Without a doubt, it is the manner of digitalization in online playing.

But still I have to say that darts is an original sport and will always remain – no matter how much technology and frills we allow the darts to thrive. At the end of the day, 3 darts are thrown onto the board per round and always in the types of play as we know them. – 01-games and cricket.

HELMUT: As mentioned before – it is the feeling that it is actually business, but feels comfortable in this community – just dart family.

NDA:  You’ve been in the industry for several years and active within NDA for a long time, too.   How would you describe your tenure on NDA’s board of directors?

HELMUT: First of all it is always a pleasure for me to be part of the NDA board. I think I can provide valuable input from a foreigner’s glasses, which has been part of the dart success story in Germany for over 20 years. When I work for the NDA, I always try to represent all views, that of the player, that of the operator and that of the manufacturer. The well-being of this unique organization of the NDA is always close to my heart.

I never dreamed that I would ever go to the NDA’s Hall of Fame. (Editor’s note: Helmut was inducted into the organization’s prestigious Hall of Fame in April 2017).

NDA:  One of the tough decisions made by the NDA board recently was the cancellation of Team Dart, which would have been conducted earlier this month.  Your thoughts on this?

HELMUT: I think this situation of this pandemic surprised us all but also overwhelmed us. Ultimately, it was right to cancel the event. But I also have to say that ultimately politicians and specialists are challenged to bring people back into their familiar environment – despite the health risks.

Please do not misunderstand the following statement, but the principle still applies in the western democratic world: “If you give up your freedom bit by bit to gain maximum security, you will ultimately lose both.”

NDA:  What have you and your family been doing to get through these challenging times?   What’s a typical day like for you?

HELMUT: I am fortunate that I still drive to work every day. Otherwise we follow the instructions of the authorities and spend a lot of time at home. Terrible – finally time to do all the unpleasant things that you put off all year round. We are sad, however, that we are currently no longer able to visit our son.

NDA:  No one has a playbook on this, but what is your outlook during the next 6 to 9 months?

HELMUT: As mentioned before: with all health risks it cannot go on as it is now. I think we have to find our way back to a normal health-controlled life bit by bit – otherwise many companies are at risk of death and the resultant human suffering.

Movie:   Lord of the Rings

Food:  Italian and that’s for sure a good steak

TV show: Two and a Half Men

Things to do in Vegas (besides playing or working dart tourneys):

Working on my wife’s shopping list – I think you even know this.

NDA:  Anything else to add?

HELMUT: I hope and wish that many people will pass this test well and that we can see each other again soon, face to face and not in video conferences.