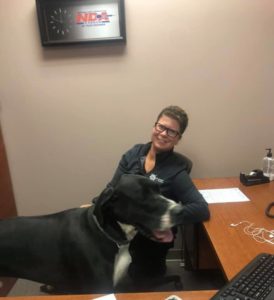 NDA: Rachel, tell us a bit about yourself—where you grew up and live now…and your family.

RACHEL: I grew up in Orland Park Il, about 5 miles away from the NDA headquarters and now currently live in Romeoville Il with my fiancé and 3 dogs. I am the youngest of 3 girls.. My dad had a great time with that…. I have a wonderful brother in-law and 2 amazing nephews!

NDA: Besides work, any hobbies or interests?

RACHEL: I love video games, most nights I like to have a drink and play Xbox. When the weather is nice, I spend each Sunday at my parents’ house with the rest of my family . We BBQ, play outdoor games and swim. We are a very close family and love spending time together.

NDA:  When NDA’s new management team came on board in September 2016, you were its first hire.   Did you know anything about darts or trade associations when you started?

RACHEL: I had a steel tip board in my garage which my friends and fiancé would often play cricket and 01’ on, but before the NDA, I never played soft tip or was in a league. After being introduced to soft tip boards, I prefer to throw on them.

NDA: As NDA’s Operations and Tournament Manager, what’s included in your responsibilities?

RACHEL: As the Operation and Tournament manager, I work with the Executive Director and the rest of the staff to achieve organizational goals and direct successful tournaments, including Team Dart, the Junior Tournament, NDA Regional Tournaments and other events, I also oversee the daily work flow at NDA’s headquarters.

NDA: Part of your job is to travel and oversee/help run national, regional and state tournaments.   After being a dart event road warrior for the past 3.5 years, what have you learned about the players and these events?

RACHEL: I’ve learned the game of darts is so much more than just a game. The players throw and travel so much together they truly become a family. Husbands and wives all get together and spend the tournaments not only throwing darts, but spending fun quality time together. The NDA Jr event is my favorite. I have watched kids grow into young adults and make friends from throwing darts. They have such a genuine love for this sport and it’s great to see that. Also watching the players develop is great. I spoke with and watched and young girl named Kimberly Kolthoff throw at our Larchwood regional tournament. She told me about how she had just gotten into darts and loves it. She said she wanted to work her way up to be “the best.” A year and a half later, she performed so well at Team Dart 2019, she was invited to play on the women’s Team USA this year. Unfortunately. I will have to wait another year to watch her throw, but I am still looking forward to it.

RACHEL: I love that it is always changing /developing. The history of darts is long and has come such a long way! I’m looking forward to what the future has to bring for darts.

NDA: It has been quite disappointing to have to cancel some NDA events, especially this year’s Team Dart.    How do you feel about the impact the pandemic has had on NDA and the electronic darts community?

RACHEL:  I think it is so sad. Like I said earlier, these people are family. Not only the players, but the operators and league coordinators are as well. I think it’s safe to say, we all look forward to these events. For some of us, it’s the only time we get to see people that we consider great friends. But like all things, this will pass and we will be back to having a few drinks and shooting darts.

NDA:  Besides working remotely, what have you been doing to get through these challenging times?    What is your typical day like?

RACHEL: I have 3 dogs, so they have been loving my extra at home time, and all the added walks they are getting. In the fall my fiancé and I began renovating our house, so we have been crossing off items on our to-do list there. We have painted and redecorated all the bathrooms. This weekend we will start stripping and painting our cabinets white.

…Thing to do in Vegas (besides working Team Dart): Bellagio Fountains and Spas