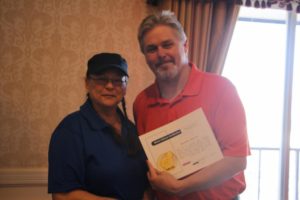 (Editor’s Note: Shawn Smith served as NDA’s 28th President in 2017. He is an NDA Master Referee and a member of the eight-person Tournament Committee that oversees NDA’s tournaments and events).

NDA: Shawn, tell us a bit about yourself—where you grew up and live now…and your family.  Besides work, any hobbies or interests?

SHAWN: I grew up in Henderson, Kentucky, just across the river from Evansville, Indiana. I have two brothers and a sister, and a son, who is 15.

I really don’t have any hobbies. One thing I found out by being home so much because of the coronavirus is that work took up all my time. Like a lot of people, I have done a lot of yardwork and watched a lot of shows on Netflix, but for a long time, my job has been my focus.

SHAWN: I started off playing darts at about 15 years old, playing a lot in pool halls until I was 21 and I was allowed to play in a league. One night about 20 years ago, I was playing in a league and I told a friend of mine who was in the business, that if he ever needed any help working on dartboards, let me know. He helped get me an interview with Kentuckiana Vendors and I started out as a tech. A couple of years later, when the dart coordinator left, I took over. That was about 18 years ago.

For me, as a player, it was a smooth transition, but initially, we did lose players, because it was a change and they didn’t know me. It took me a while to gain exposure with the players, to listen and learn from them and to build their trust. After my first year, when we had about 20 players at the Indiana state dart tournament, we’ve had a long, steady growth spurt, to where we have brought up to 280 players to the state tournament.

NDA: As league director at J & J Ventures/Kentuckiana Vendors, what are your primary responsibilities?

SHAWN: Basically, I take care of all of our league programs–darts, pool, golf or whatever and make sure they are run fair and well. Things like making sure everyone is playing their games properly, taking care of their questions and needs and also, working to promote the growth of darts. Right now, we have about 350-400 dart players and about 100 pool players in our league system.

NDA: Speaking of growing the sport of darts, you were instrumental in starting your company’s youth dart programs. How did that get going?

SHAWN: We had sponsored a few tournaments, and had started to get a small, but good following. In Vincennes (Indiana), we had a group going. We pitched the program there and that’s where it started. We had a youth player there, Robby Young, who died, and his whole family picked it up family as a way to honor his memory. It was challenging at the beginning to keep it going, but as we produced some good players and had positive results, it spawned youth programs in Evansville and it has sprouted from there.

NDA: You are also one of NDA’s Master referees.  How did you get into that role and what’s the best and worst part about being a dart referee?

SHAWN: Being a dart referee came about early on when our general manager told the director of our state tournament that “Shawn will do whatever you need.” There were no refs at our tournament in Indiana, so I was talked into taking the ref course. Around 2001, I took a course taught by NDA head referee Bernie Marsh in Indianapolis during a Dart Smart conference. I got certified there and went to Vegas in 2004, where I finished my “shadowing” role (basically an apprenticeship period, where a junior ref is mentored by a veteran ref onsite at an NDA tournament). The following year, there was an opening for a Team Dart ref–which was unusual–and they asked me back. So, I have been working that event as a referee each year since 2004).

The best part about being a referee is to provide answers that everyone has questions about. I like the aspect of helping. The worst part is that when I get a call to go to a board, I know that somebody’s gonna be happy, but also, that somebody else is going to be unhappy. That’s just the nature of being a ref.

SHAWN: The sport of darts is like a secondary family for players. They like sticking together, and when someone in darts is in need, there always seems to be people there who are willing to pitch in and help 110 percent. It’s unique.

NDA:   With your hectic schedule, do you still get a chance to play?   If yes, how Is your game?

SHAWN: I still pay a little bit, in one league a session, but usually, I only get to play in about half the matches, but the team I play with understands that, with my schedule, I just can’t commit to being there every week.

NDA: When you play, are you able to relax and take off your coordinator and ref hats? How’s your game these days?

SHAWN: I’ve learned to keep my hats on. One night, I was playing in a league–one that I still play in. I was there to have a good time…basically thinking I was off the clock. Someone approached me and asked me a question, complaining about the leveling at the state tournament. I jokingly told him he just needed to shoot better. He got very offended and I quit the league, until the guys I played with asked me to come back. So, it was a learning situation for me. I wear all my hats when I play. Sometimes it makes playing a little less enjoyable, but it comes with the territory.

As far as my game, it’s certainly not as good as it once was. But, I just don’t play or practice as much as I used to. It can get frustrating, but I have a good friend, who is a very good player, who told me: “you could have been as good as me, but you just chose a different path.” He was right.

NDA:   You’ve been around countless novice players.  What’s the best piece of advice you give to a new player?

SHAWN: I feel the best piece of advice I can give is encouragement. You can try to tweak with the way someone throws, but general encouragement is what gives them the confidence and desire to continue playing. Typically, I can tell, by the look in a player’s eye, whether they have the competitive potential, and it goes a long way when a new player gets a compliment or words of encouragement from a player they recognize and respect.

NDA: If you could play darts with (or against) any person (living or deceased—whether a dart player or not), who would it be and why?

SHAWN: Gus Stewart, just to spend some time together.

NDA:  You’ve been around this industry/sport for a long time.   What’s the biggest change you have seen over the years?

SHAWN: Remote game play has revolutionized the industry. It has opened things up in so many ways and increased the skill of players. Back when I started, if you were a 3.0 PPD player, you were a king dog. Now, with the Introduction of remote play, it continues to push the limits of the really good players. Everyone wants to be king dog and remote play is helping raise the bar.

NDA:  You have been involved in NDA for 16 years.  You served as the organization’s President in 2017 and are currently a member of its Tournament Committee.  What has your involvement in NDA meant for you—personally and professionally?

SHAWN: NDA means a lot to me. It’s given me the chance to help grow the sport that I love. It has Introduced me to a lot of different people that I’ve learned a lot from and become good friends with. It’s another whole family. I’ve taken so many ideas I’ve picked up through NDA and put them to use. I’ve shared my ideas and hope I’ve given some back to NDA and darts.

NDA:  You are involved in virtually everything from setup to teardown—and everything in between—for Team Dart.  It’s really a year-round planning cycle and you had a lot invested in this year’s tournament.   What are your thoughts on the event being cancelled due to the coronavirus pandemic?

SHAWN: It was a very tough decision that wasn’t taken lightly. It was the correct one, but sad, that we didn’t get to be with our friends and extended family in Vegas this year. But keeping everybody safe is more important.

NDA: What have you been doing to get through these challenging times?    What is your typical day like?

SHAWN: I have not been to my office since early March, when i attended a trade show in New Orleans and then things shut down. Like I said earlier, I’ve gotten some work done around the house and yard and watched a lot of Netflix, but I still get up at the normal time each morning. I drink coffee now in the morning. I’ll catch news updates and follow the stock market and talk on the phone with some of my colleagues about our game plans on reopening, but it feels abnormal. I’m by myself more than ever, and if there’s anyone who is ready for this coronavirus to be over, it’s me.

NDA:  No one has a playbook on this, but what is your outlook during the next 6-9 months?

SHAWN: I see things slowly reopening. By six months, I think we will be up and running again, And even though there are many in the general public who are going to be scared about the future, I think we’ll be okay and rebound.

…Thing to do in Vegas (besides running a dart tournament there): Spending time with friends that I’ve made there.